Home Food Nigiri VS Sashimi: How do they differ and which is better? 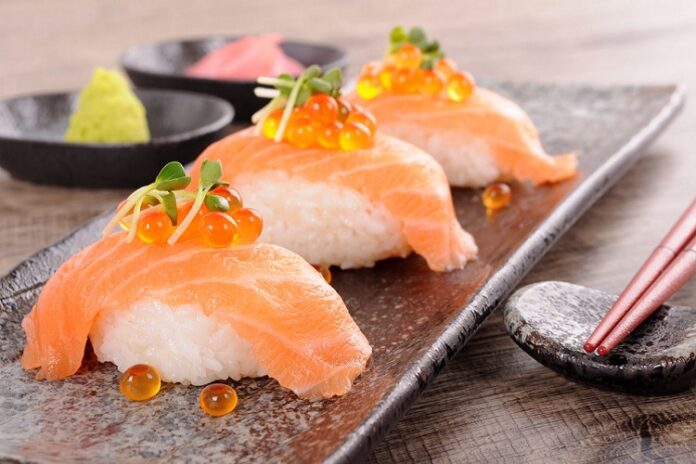 Nigiri VS Sashimi: It is a debate going on since decades! Both sashimi and Nigiri are considered to be among the most well-known examples of Japanese cuisine; as a result, it is not uncommon for people to get the two terms mixed up when they are discussing sushi. However, the reality is that Nigiri sushi and sashimi are two whole different things, and it’s important to be aware of what makes each type of sushi so delicious. The foundation of the Nigiri is comprised of this vinegar rice that has been formed into a ball and flattened with two fingers. Following this, a slice of raw fish, sometimes accompanied by a dot of wasabi, is laid atop the bed of rice. Sashimi consists of thinly sliced fresh raw fish (and occasionally other types of meat), which are then topped with a variety of different condiments. The freshness of the fish, as well as the technique in which it is sliced, presented, and decorated, all contribute to the overall quality of the sashimi. Garnishes such as shredded daikon radish, toasted nori, and shiso leaves are frequently used (sea weed). Pickled ginger and wasabi mixed with soy sauce are served alongside Nigiri and sashimi dishes, respectively.

Nigiri is a form of sushi that is considered to be among the most authentic and pure representations of Japanese cuisine. A piece of raw fish is placed on top of the rice that has been seasoned with vinegar and is known as sushi rice or sticky rice. Nigiri is a type of miniature rice ball (or rice mound). Nigiri sushi features all three flavors—sweet, salty, and tasty—in a single bite. Nigiri is a type of sushi that is quite popular in Japan, particularly among sushi fans. Fish and sushi rice are the primary components of this dish. The bottom layer consists of sushi rice, which has been seasoned with vinegar and a sweetener, and a thin slice of fish is placed on top. Nigiri can be made with a wide variety of ingredients, including uni, salmon, yellowtail, halibut, and tuna, among others. In the vast majority of eateries, there is a speck or two of wasabi tucked away in the space between the fish and the rice. At some restaurants, the wasabi is served on the side so that customers can determine how much of it to put on their rolls.

It may come as a surprise to some people, but sushi does not technically include sashimi as one of its components. Rice is the one component of sushi that cannot be omitted under any circumstances, and sashimi, on the other hand, does not include any rice at all. Sashimi does not always have to be fish; it can also be other types of meat. Some people like to top it with a different type of raw fish. Additionally, it can be accompanied by pickled ginger, wasabi, daikon radish, or even avocado on the plate. Because of the superior quality and painstaking attention to detail required in its preparation, sashimi typically carries a higher price tag than Nigiri does. Sashimi is in no way comparable to sushi. A dish must have rice in order for it to be considered a member of the sushi family, whereas sashimi can only consist of raw fish or meat. Even though it’s not really sushi, sashimi is frequently found on menus that feature sushi. Sashimi made from salmon, tuna, and yellowtail can be found at the majority of establishments that serve sushi, in my experience. It’s an interesting fact, but sashimi doesn’t always consist of raw fish. Additionally, there are chicken and meat-based variants available. It is also possible for it to be composed of various kinds of seafood, such as shrimp and squid. Sashimi preparation is an art form, and in order to perform it properly, one must have the precision, attention to detail, and talent to accomplish it correctly. However, for those who are able to procure fish of the appropriate quality, sashimi can be prepared at home.

Sashimi as an Art Form

The proper presentation of sashimi is a source of great pride for chefs who prepare sushi. Sashimi, which consists of thinly sliced raw salmon, can be appreciated on multiple levels and by all of the senses, despite the fact that it appears to be the most basic kind of cuisine. Sashimi is often had at the beginning of a meal, before the heavier dishes begin crowding the palette. This is because sashimi is both one of the simplest and the most graceful ways to enjoy fish. During the first stages of a multi-course meal, diners’ palates are more receptive to new flavors and are better able to distinguish the subtle differences between the various kinds of fish.

The Fiction of Fresh Fish

Some people who are not familiar with Japanese cuisine may feel uneasy about the practice of eating raw fish. At the same time, a lot of people who like sushi will tell you that they only like it when it has the “freshest fish.”

The image that pops into our heads as Westerners when we think of sushi is a dark roll filled with sushi rice and a variety of additional ingredients. This type of roll, known as a Maki or Makizushi, is called a Maki and is likely the most well-liked style of sushi on our side of the world. To summarize, a Maki is a type of roll in which the components of the roll, such as rice, raw or cooked fish, various types of seafood such as shrimp, veggies, and cream cheese, are encased in a sheet of “nori,” which is a type of dried seaweed. The seaweed is placed inside of Nigiri sushi rolls, while Maki sushi rolls have the seaweed placed outside of the rolls. This is the primary distinction between Nigiri and Maki sushi rolls.

Nigiri VS Sashimi: What’s The Difference?

Why is the price of Nigiri higher than that of Sushi?

Nigiri is frequently the more expensive of the two types of sushi, which may seem counterintuitive given that sushi normally contains more components than Nigiri does. This is mostly due to the fact that Nigiri can only be made with the freshest, finest cuts of fish, whereas sushi rolls can also contain different types of meat and vegetables. Nigiri also typically makes use of more expensive fish, such as Bluefin tuna, which is packed with taste and practically dissolves in your mouth. Additionally, it takes more time to create uniform sections of Nigiri than it does to make the majority of sushi rolls.

What’s the difference between Sushi, Sashimi, and Nigiri?

Nigiri and sashimi are distinct from sushi, despite the fact that there is significant overlap between the three. In contrast to sashimi and Nigiri, sushi rolls always have at least three different components. Raw fish and other components, including as vegetables and sauces, are combined with rice and nori before being rolled up into sushi Maki rolls. These rolls are then served as an appetizer.

Which Knives Are the Most Appropriate for Preparing Nigiri and Sashimi?

The blade of the Yanagiba knife is extremely long, skinny, and narrow, and it is only beveled on one side. Developed exclusively for the preparation of sushi and sashimi

The Kiritsuke is a multi-purpose knife that is commonly used for preparing sashimi as well as vegetables. This versatility is not typically found in Japanese blades.

A santoku is not a sushi knife. However, in terms of their use, they may be used in the comfort of one’s own home to prepare the components of sashimi and Nigiri; the greatest thing is that they can be used for a great deal more than just that!

Nigiri and sashimi are traditionally served not fresh but rather prepared in the kombujime style instead of being served immediately after being cut. The name Kombujime derives from Kombu, a species of kelp that is native to Asia and is commonly consumed there. The procedure of making kombujime begins with the fish being soaked in sake or salt water after it has been freshly caught. After that, the sushi chef crushes the fish for a few days while it is wrapped in Kombu leaves and pressed between two leaves. This approach allows you to accomplish two goals at once. To begin, it draws out excess moisture, which immediately makes the substance more stable and improves its consistency. Second, the Kombu imparts a pleasant saltiness to the dish, which heightens the fish’s natural umami flavor. Not every sushi restaurant in the United States adheres to this conventional preparation from Japan. There are several sushi restaurants that provide fresh seafood, which imparts a unique flavor to the dish.

Eating Less Processed Food: What Does It Take To Get There?